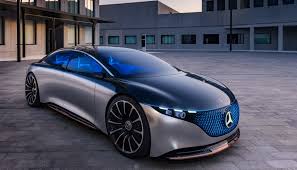 The EQ EV sub-brand by Mercedes carries on growing with new vehicles being included apparently every few months. That is good news for admirers of luxury cars who also need to be pampered when they use it. The newest concept car although is something different.

The Vision EQS is the firm’s glance into its sedans’ future. While it is improbable the concluding EQS will be as outstanding as the concept car disclosed during the Frankfurt Auto Show, it might be a shame to not see the styling.

The car has the normal blue and silver design aesthetic that we have witnessed on other Vision EQ cars. It is also rife with the spherical edges that we have come to anticipate from design studio of Mercedes. While the profile reasonably resembles a bean, users are still fan of the general appearance of the car particularly its low profile. Apart from looking cool, it has some imposing specs.

The car will offer 560 pounds of torque and 469 horsepower. That will take it from 0–40 in less than 4.5 seconds as per the firm. The battery pack with offer it a 700 Kilometers of WLTP range of and it will support almost 350kw of charging so it can go from 0–80% in almost 20 minutes. This is swifter than buying beef jerky or taking biobreak. Mercedes-Benz claims that by the end of 2019, it will have 20 completely electric vehicles for sale.

On a related note, Mercedes earlier jumped into electric vehicles in a huge way with its EQ series, but sensibly, in the near term it is going to be selling a lot more hybrid cars. To that point, the German company this week launched the all-new GLC 350e 4MATIC EQ that runs on its hybrid tech’s 3rd generation.