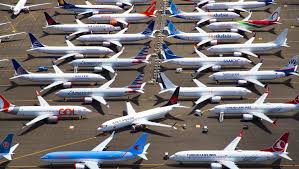 Boeing has decided it will restart manufacturing the 737 MAX airline even before the regulators have their say in order to indicate that the company is confident about its airliner. As per a report by Bloomberg, Boeing will resume producing one of its best-selling airliner by the end of second quarter this year in an attempt to recover from arguably the worst business situation it finds itself in currently. Boeing’s 737 MAX jets were grounded back in January 2019 by aviation authorities as a total of 346 passengers died in two separate crashes ten months earlier.

The ban on 737 MAX and the company’s intermediate attempts to cope up with it have left them in a spot of bother. While Boeing are hoping to start manufacturing more 737 MAX airliners, airlines are more interested in NMA, the airliner Boeing started planning almost a year ago.The NMA will be designed to carry around 270 passengers and will be shaped in an ovoid-like manner to accommodate for more cabin space and less cargo space. Last week, Boeing managed to receive a loan commitment worth USD 14 billion to help itself cope up with the lack of orders for its airliners from airlines. After the announcement of MAX 737’s possible return, Boeing shares went up 0.8 per cent during early trading on Wednesday.

Talking about Boeing’s woes, the company is further hit by the coronavirus outbreak in China, which has left the entire aviation industry reeling. The company had earlier predicted a growth of 1 to 2 per cent in the aviation industry this year as the United States and China had finally come to terms with each other following a prolonged trade war. The trade deal was expected to resume Boeing’s sales in China.