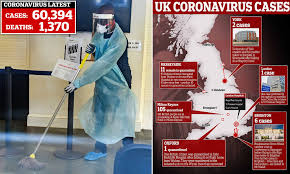 NHS boss Sir Simon Stevens told that people may be required to self isolate themselves to understand the importance of preventing the spread of the deadly coronavirus. Britain had set up its own quarantine unit and recently more than 80 people were released.

Mr Stevens told that this was an important example to understand people know how to contain the disease.

A new case has been identified in a woman after she went to the hospital in an Uber. Authorities claim that the driver was not at high risk. It is presumed that she had come in contact with the virus in China. It is the first case in the capital city of London.

She went by herself at the A&E department of University Hospital in Lewisham on Sunday, 9th February said Ben Travis who is the chief executive at the hospital. Public Health England told that the driver was not at risk because the drive took less than 15 minutes and there was no close body contact.

Uber had instantly blocked the account of the driver due to lack of information but later told that it would compensate the driver for the lost income.

After the woman reached the hospital she was given a mask and taken to the dedicated area for tests. She was further examined in a completely isolated room in the emergency department. She has been discharged by the hospital.

All the staff members who have come in contact with the woman are being kept under surveillance at home and the hospital and will be done for a period of fourteen days on the advice of the PHE.

The tests revealed positive for the presence of coronavirus in the woman and she was admitted to the St. Thomas Hospital on Wednesday evening.

A nurse at the PHE had to self isolate herself after coming in close contact with a person who was being tested for the presence of the virus. She had accused the hospital of not providing enough information and training on how to handle patients and suspects.