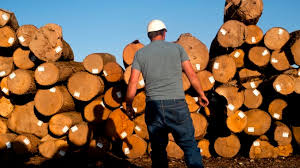 Difficult times for Hardwood Lumber firms in the U.S due to trade war

Hardwood lumber industry in U.S has been struggling. Due to the ongoing trade conflict between China and U.S, their rate of exporting products has declined leading to firing huge number of employees. China had been the importing nation for almost half of the hardwood lumber exports from U.S. That amounted to $2 billion every year. After Trump administration had introduced 25% tariff, demand has experienced severe downfall.

American Hardwood Export Council commented that following the difficult phase of a year after the tariffs were introduced by Trump during July 2018, exports to China decreased by a remarkable rate. This year’s earning was approximately $615 million than last year. During June 2019 when the tariffs were being levied full fledge; business was down by half than what it had been during the same time last year. Global program manager from the council, Tripp Pryor stated that the hardwood industry in America is experiencing difficult times in China. The industry has fallen in between the worsening trade fight between two nations, China and U.S. Consequently, the industry is on the verge of losing their biggest client in the market due to business and political reasons. What is worst is that, the industry is failing in market shares and that would not be gained back anytime sooner.

Hardwood is used for several purposes like cabinets, flooring, doors, furniture etc. In fact, employees in Northwest Hardwoods’ mill situated at Mount Vernon in Washington could be fired any day because of increasing job cuts. The mill would be closed in November and 70 people would lose jobs. Washington based firm, Tacoma is the biggest hardwood producer in North America. They would soon be closing down a mill in Virginia. 30 people would again lose jobs. At the corporate sector, 30 employees would be cut short.