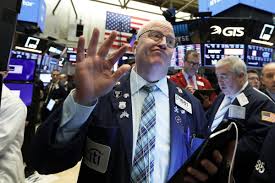 News from China on trade affects the stock market. 5 stocks hold up.

There was a modest rise in the Dow Jones futures later in the day on Tuesday as the S&P futures as well as the NASDAQ futures rose as well with the stock market rallying post the comments of Fed chairman Jerome Powell which confirmed their plans of expansion of the balance sheet of the central bank. This happened after the markets slumped into serious losses on the negative trade news coming from China. The stocks of Dow held up well including Boeing, Home Depot, Nike, Apple and Walmart.

The stocks of Apple, Boeing and Home Depot along with Nike and Walmart had all held in the buying range with Boeing being the only one which had undercut the recent intraday entry. All of these five stocks had fallen less than S&P 500 index. Walmart stock had managed to actually edge up higher. These performances can be considered to be solid as stocks like Apple, Boeing and Nike have significant trade risks with the US-China trade war.

The Dow Jones futures often switch gears overnight like they did on the morning of Tuesday on the news of the trade negotiations.

Trump administration, late on Monday had said that it is going to blacklist as many as 28 Chinese companies for the involvement they had in the human rights abuse they had done against Muslims in the western part of China. China also showed signals of retaliation which affected the Dow further pushing it lower.