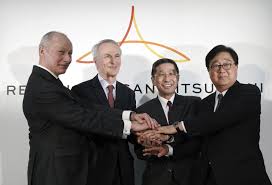 The three auto companies have planned to strengthen their research and development. A new venture will help them to pursue their common goals.

According to Kyodo News on Sunday, the three companies will form an alliance to lead in advanced automotive technology by concentrating on research and development. This will also help to strengthen the alliance, claims the report.

Carlos Ghosn, the former head had held the three companies together with great strategies to bring them to higher levels and step up sales. Though he was accused of financial fraud, he continues to deny the allegation made against him.

But now after his ouster, the three companies plan to have a general secretary to lead them again and to help in joint operations. The restructuring will help in the smooth running of business through better performance.

Ghosn who was earlier heading Nissan was charged with financial misconduct last year and has been imprisoned in Tokyo. Nissan has now brought in a new leader at the helm. Makoto Uchida from China has been appointed. The new head has vowed to bring back Nissan to its former fame.

Renault had appointed Clotilde Delbos to lead the company as an interim head. Steps to appoint a new head continue at Renault.