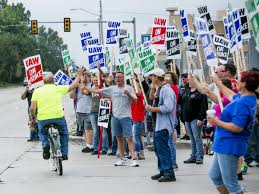 United Auto Workers’ Union has begun a strike to support their affected members. However, the continuing strike might pose a big threat to the economy of Michigan and push the state into a pit of recession. Lending Tree and Investors Service of Moody have warned. The company also informed regarding the bond ratings. They said that the sudden halt in the work which is already in its fourth day has posed a big economic threat to the state. In fact, the local governments are also under the same threat like Detroit.

Moody informed in a research note that the strike has put huge pressure on state and municipal bonds of Michigan. The firm mentioned that continuance of the strike would depend on for how long GM facilities stay shut and local governments should find out whether income tax revenues are important as revenue source. Moody also gave estimation that if the strike continues for several weeks, total state revenue withholdings would fall by approximately $3.5-$4.6 million every week. Besides that, it would also affect other businesses.

Leaders of UAW were forced to call the strike following the failure of a negotiation discussion which should have already been made into a deal by the Saturday night deadline. Approximately 48,000 workers belonging to 55 various facilities across 12 states started manning picket lines in place of assembly lines on last Monday.

GM has been using temporary workers, planning to close down plants and issues with health care contributions have remained the major issues of the strike. Facilities across many states are having significant impact due to the strike because the economy in Michigan is highly dependent on automotive industry. Moody said that plants of GM in Michigan forms one-third of the total U.S factory headcount of the company. The strike if continued would not only affect Michigan but also the U.S economy as a whole.