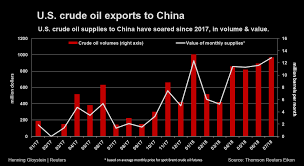 Rise in prices of Oil on the trade fallout in US and China.

On Friday, there was a rise in the prices of Oil after China and US seemed to finalize a trade deal which would have postponed the tariffs. However after the details had been studied the investors lost all of their enthusiasm.

On Monday, when Trade began the crude prices were low which reflected the disappointments after the announcement of the trade last week. President Donald Trump had tried his best to sell this deal and argued that this was the first of the phased approach which would eventually lead to a broader and a more comprehensive trade agreement. He had also encouraged the farmers in America to buy more tractors due to the big volumes of corn and soybeans which China is going to buy.

On Friday, the markets globally had pushed higher with the news that United States that the tariffs which were scheduled to increase from 25 to 30 % on the $250 billion worth of goods from China would not be increasing.

Though the primary justification of the trade war to start with were the deep disagreements over the industrial policy of China, the theft of intellectual property, the forced transfer of technology and the other structural issues had remained untouched which has raised the questions about how the two sides wanting to agree on something that can be termed as comprehensive.

The existing partial trade agreement is consisting of China promising to but the agricultural goods in US in the exchange for a suspension of tariffs which leaves the already existing tariffs in place.

The experts have said that the trade agreements between US and China do not mean much as both the sides in the past have not kept up to their agreements.