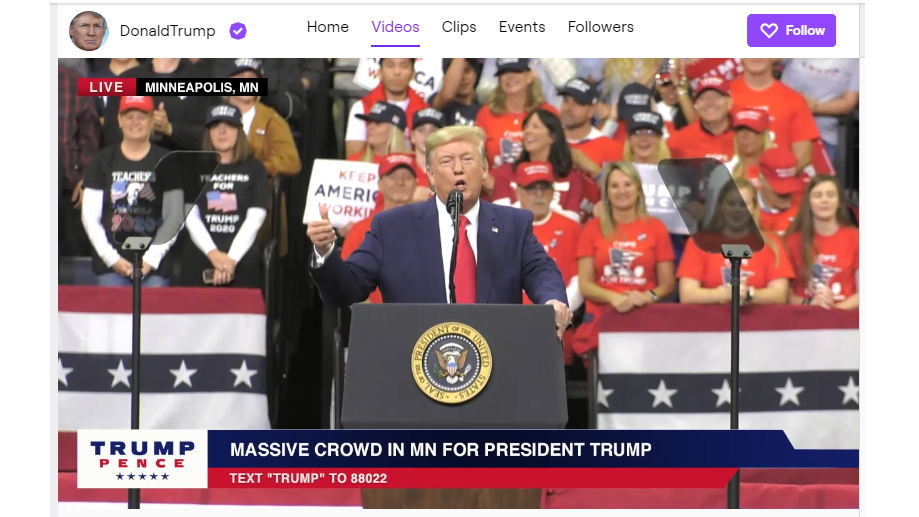 To boost the campaign for presidential re-election, Donald Trump joined Twitch which is an online gaming site by Amazon. President Trump has near about 40,000 followers on the writing time; he created an account on the site during Minneapolis rally on Thursday.

There are several links on Trumps official page with which viewers can enter his campaign web portal, online store and there is one button which remind supporters for their support and donation. Donald Trump is following strategy of Sen. Bernie Sanders; he is considered as Trump’s political rival and has 88,000 followers on his Twitch account.

Back in January Alexandria Ocasio-Cortez, who is a democratic congresswoman appeared on Twitch during online video fundraising event. Though Trump frequently uses his Twitter account, by joining the online-gaming platform he may want to convince younger voters since the presidential re-election is underway.

Twitch was launched in 2011 and it has main focus on live streaming of video gaming. Moreover, it also undertook live streaming for several other events like music concerts, talk shows, sports etc. Since the debut of Twitch the platform has made considerable profit in live game streaming business. During 2014, Amazon bought this service for around $1 billion. As per the statistics of the Company it receives 15 million visitors on a daily basis and 1.3 million visitors at a particular time interval.

Jeff Bezos and Amazon were repeatedly criticized by President Donald Trump for hitting at tax policies of the Company and also accused them for exploiting the postal service of United States. Previously, Donald Trump also blamed video games for glorifying violence in the American society after school shootings.

Contrary to this, researchers hadn’t found any direct link between mass shootings and people who play violent video games. Moreover, there has been a recent attack in a town of Germany where a gunman shot and killed couple of people and streamed the killings live on Twitch.